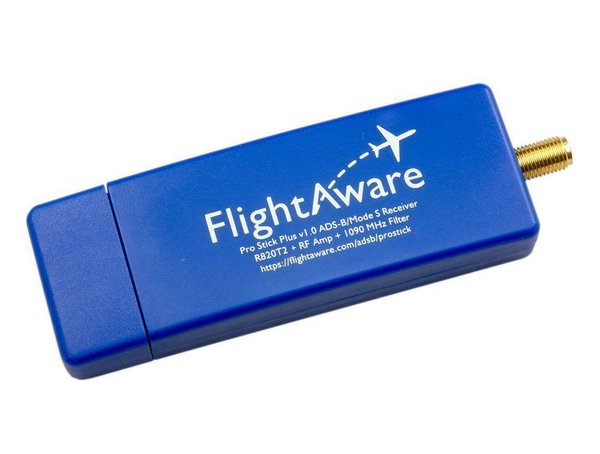 Flightaware Prostick Plus ADS-B Receiver Automatic Dependent Surveillance - Broadcast (ADS-B) is a technology which enables aircraft to determine their position via satellite and then broadcast it.

This information can be received by ground stations enabling aircraft to be tracked. With FlightAware, you can build and run your own ADS-B ground station that can be installed anywhere and receive real-time data directly from airplanes on your Raspberry Pi! FlightAware has revolutionized the world of USB SDR ADS-B Receivers with the FlightAware Pro Stick Plus, high-performance USB R820T2 Software Defined Radios (SDR) with a built-in RF amp for maximum ADS-B/MLAT performance. The first of its kind, FlightAware's Pro Stick is compatible with PiAware or any other device that supports USB RTLSDR receivers, and is less expensive than any other RTLSDR USB receiver in the world. The Pro Stick Plus adds a built-in 1090 MHz bandpass filter for increased performance and range of reception in areas with moderate RF noise as is typically experienced in most urban areas.

The Pro Stick Plus are roughly the size of a traditional USB stick and require no external power. There are no moving parts. Pro Stick Plus Features Higher Performance for ADS-B and MLAT Increases range 10-20% over Pro Stick when filtering is beneficial A 1090 MHz bandpass filter (whether built-in or a separate external part) is generally recommended for users in urban environments or with known high power radio transmitters nearby such as cell phone towers. Filtering is generally not recommended for users in rural environments. Filtering benefits may vary and are dependent on the installation location.